Close to a thousand of you have sent letters to Premier Ford and the Minister of Tourism, Culture and Recreation opposing their plans for the possible destruction of Ontario Place.

One of the supporters of Ontario Place for All, Richard Longley, sent us a copy of his letter, and gave us permission to share it with you:

Dear Premier Ford, Ministers Tibollo and McNaughton, all others who care about the future of Ontario Place and Exhibition Place.

Why the urge to destroy Ontario Place in order to save it? Why the reflexive insistence on “no residence”? Call an international design competition to consider its future?

I’m relieved that the provincial government has abandoned the idea of a casino at Ontario Place. But I am dismayed that every part of architect Eb Zeidler and landscape architect’s Michael Hough’s “machine in a park” is available for “transformation”. Pods, islands, Cinesphere and the stunningly beautiful Trillium Park with its William G. Davis Trail, its superb views of Toronto and its references to historic First Nations presence on the lakefront – all are up for grabs.

The grotesquely ugly (but very successful!) Budweiser Stage built in 1995 on the site of Eb Zeidler’s demolished but still much missed Forum (that was also extremely successful) is the only part of Ontario Place that’s protected. (Paradoxically, by a lease with Live Nation, an affiliate of Labatt’s Brewery, that seems to warrant more Provincial Government respect than the lease that protects the Beer Store).

The Ontario Place Call For Development acknowledges that it cannot flourish year-round without public transit superior to what is there at present. It currently requires a long, bleak walk over a parking lot desert to the bridge to Ontario Place. If the Ontario Line is built – for an estimated cost of $10.9b – it would go through the city, connecting the south-centre of Exhibition Place to the Ontario Science Centre. But will the Ontario Line be built if year-round ridership to and from Ontario Place and Exhibition Place cannot justify such a colossal investment?

Not acknowledged in the Call for Development is something agreed to by all who have thought about its future: Ontario Place cannot be improved without parallel improvement of Exhibition Place.

But the strangest paradox in the Call for Development must be this: “Residential development will not be permitted on the site.”

Why does this reflexive prohibition against residence persist, when the desire of all who would revitalize Ontario Place or rebuild it, is to make Ontario Place alive and active year-round?

Will the “entertainment, sports, commercial, recreation and/or leisure attractions” suggested in the Call for Development provide sufficient riders for the Ontario Line, 365 days a year, if no one is allowed to live there and create businesses near its Exhibition Place/Ontario Place terminus? (Note: near not on the Ontario Place site.)

The idea of Residence near Ontario Place has not always been taboo.

Harbour City was proposed in 1970 by the same Progressive Conservative government of Premier John Robarts that also produced Ontario Place.

In the video, Eb Zeidler proposes the construction of low- to mid-rise, low and medium cost housing for a population of 45,000-60,000 on reclaimed land between Ontario Place and the Toronto Islands. The community would be connected by canals and lagoons and protected by a ring of islands that would add 200 acres of parkland. Two-storey houses, one stacked above the other would be connected by walkways. The front of each house would face a community mews and children’s play space, the back would face water. Transit to the mainland would be by monorail similar that built for Expo ’67. But not everyone would be a commuter. People would work as well as live at Harbour City, houses would be convertible to restaurant and other uses and business spaces would be interleaved with housing up to nine storeys high.

In the video, Urbanist Jane Jacobs brims with enthusiasm as she leans over a model of the project: “I’d like to live right in here because it’s very busy. In front, it’s a street, almost a plaza but in the back it’s a little pastoral scene. And the water! Two totally different worlds right at your doorstep. This is really exciting.  The whole place is full of variety. Every time you walk a little way, turn the corner, look around the corner you’re having a new experience. It isn’t dull. It isn’t routine. This is what a city ought to be. We’ve heard an awful lot about high density and people have been led to believe that high-density means high-rise living, monotony, barracks. Not true at all! This is a very high-density project and yet there’s nothing overwhelming or impersonal or routine about it. This is one of the reasons why I think this may be the most important advance in city planning that’s been made this century. It shows us what high-density living can be.”

Alderman William Kilbourn was equally keen. “Harbour City gets us away from idea that a new community has to be a sort of necropolis of bleak high-rise, a bunch of tombstones with some token rather wind-swept inhuman park space of grass or cement.” He also insists – enlarging on Eb Zeidler – that Harbour City must be “for people of all incomes and conditions.”

If Harbour City had been built it would have been steps from Ontario Place and Exhibition Place and, by bike, boat – or adequate transit, if it too was built – minutes from downtown.

Eb Zeidler’s Harbour City would never be realized. One of the reasons was a fear that pollution would leak into the lake. And the fact that, as well as on 510 acres of artificial islands, Harbour City would have been built on 220 acres of land occupied by the Island Airport, forcing it to be moved elsewhere on the Toronto Islands.

If Harbour City was doomed not to provide housing near Ontario Place, how about a less romantic location: the concrete desert of Ontario Place and Exhibition parking lots that must be the most valuable under-developed lands in Canada?

Too far from downtown for commuter parking, it’s all but empty most days of the year. How much of that land with its 6,420 above-ground parking spaces is needed during such special events as concerts at Budweiser Stage, games at BMO field, the Caribbean Festival, the Royal Winter Fair, the Honda Indy, the Ex? If any of that land is spare, why not build residences on it with spaces for artists, makers and businesses that would allow people to work as well as live near Ontario Place and Exhibition Place? 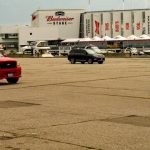 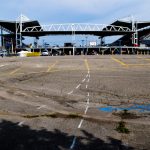 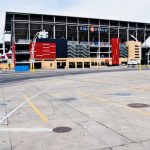 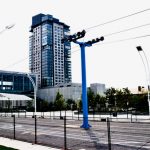 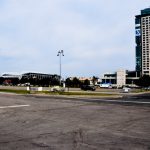 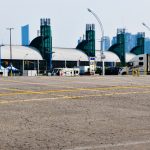 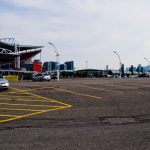 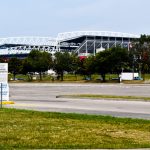 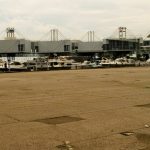 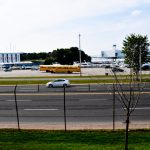 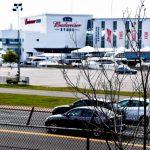 If parking was sent underground at Ontario Place, it would allow more attractive and profitable uses above ground. Would construction on those parking lots obscure views to and from Exhibition Place and Ontario Place? Not if it were low-rise and as cunningly designed as Harbour City. The views couldn’t be any worse than they have been for decades, thanks to the presence of those parking lots.

Harbour City might have hovered too close to fantasy but is there nowhere on those barren parking lots of Ontario Place and Exhibition Place, where there might be room for exciting architecture that would brim with economic, cultural and recreational potential? Are there architects, planners and politicians who can make that dream come true, without crippling Exhibition Place or destroying Ontario Place?

Politicians? The government that commissioned and built Ontario Place and sponsored Harbour City was, like the present provincial government: Progressive Conservative.

Premier John Robarts’ passion for Ontario Place is remembered in a few fragments of what he said at a preview of Ontario Place in November 1970: “We should let our imaginations soar. . ..  a major new recreational complex for the use of the people of Ontario. . .. a new focal point for our province…. a new attitude to our lakefronts…. a new showcase for our province and people.”

John Robarts is no longer with us, but Bill Davis, who succeeded him and saw the construction of Ontario Place to its conclusion still is; so is Eb Zeidler.  If Ontario Place is demolished or disfigured by some lesser imagination than theirs, who will be to blame? Are we willing to consign Eb Zeidler to the “Rubble Club” of architects who live long enough to see their work demolished in their lifetime? That will happen if we permit a revitalization of Ontario Place that would “destroy it in order to save it“?

Architects of the calibre of Eb Zeidler teach us how to build and dream on the shoulders of giants. We’ve forgotten that too often. Let’s not do it again at Ontario Place.

In 2012 Ontario Place was listed on the list of Top 10 Most Endangered Places by the National Trust for Canada. In 2019 it was nominated again. Don’t let that nomination be justified.

Rather than call for development that might destroy it, the provincial government should call an International Design Competition for new uses for Ontario Place that will:

Challenging? Yes. That’s why the future of Ontario Place (with Exhibition Place) deserves to be addressed by an international design competition.