Donate to Ontario Place for All
News

The Ontario government has taken down Ontario Place Statement of Heritage Value from its website.

Description of the property

Ontario Place is located off the shore of Lake Ontario on Toronto’s western waterfront. The 63 hectare land and water lot property (28 hectares land, 35 hectares water) is located directly south of Exhibition Place. The site consists of two artificially-made islands linked to the waterfront via a network of structures (entry plazas, pedestrian bridges and pathways) and the public entry gates from the waterfront trail. The core area features the iconic Cinesphere and Pavilion, as well as the crystalline forms of three village clusters set within the prominent naturalized landscape, canals, lagoons and a centrally-located marina. The property boundary extends 330 metres west and 25 metres east from the edges of the islands into Lake Ontario, north to Lake Shore Boulevard and south to the end of the marina breakwater.

Ontario Place featured innovative new landforms and structures built on Toronto’s waterfront, reshaping the relationship between the urban landscape and Lake Ontario. Ontario Place, a cultural heritage landscape, remains a rare and intact Modernist expression of integrated architecture, engineering and landscape that honours and incorporates the natural setting of Lake Ontario. It was a remarkable and ambitious achievement of late twentieth century architecture, and holds an enduring influence in Toronto, the province and internationally.

Ontario Place is a cultural heritage landscape of provincial significance.

Ontario Place, a significant provincial public works project of the Canadian Centennial era, reflects a time of prosperity and social development in Ontario which began after the Second World War. The development occurred at a time of dynamic economic expansion and urbanization, of optimism and confidence, of new intellectual and cultural life within the province.

Ontario Place is a response to the success of the temporary Ontario Pavilion at Expo’ 67 in Montreal, as well as a reflection of the provincial government’s commitment to investing in cultural identity through public entertainment and educational facilities and public agencies including but not limited to the Ontario Science Centre and Fort William Historical Park.

The site in its entirety — integrating innovative approaches to planning, landscape, architecture, engineering and educational programming — represents a bold visionary statement of its time realized at a scale and quality that earned international recognition and admiration. Ontario Place has strong associations with the politicians and civil servants who shaped the idea and provided the resources, and with the designers who translated those ideas into reality. Associations are held with former Premier, the Honourable John Robarts, and provincial civil servant Jim Ramsay, Royal Architectural Institute of Canada gold medalist architect Eberhard Zeidler, landscape architect Michael Hough and play structure architect and pioneer Eric McMillan.

As an entertainment, educational and recreational centre serving the entire province, Ontario Place has attracted millions of visitors since its opening in 1971 and has remained a familiar and iconic landmark for many Ontarians and visitors. The site was intended as a place for a diverse and multi-generational audience experience.

Ontario Place is a rare surviving example of a designed cultural heritage landscape within the international modernist movement of the late twentieth century. The site created a uniquely integrated environment for entertainment, education and recreation.

The core area of Ontario Place (see map) remains relatively intact and embodies the modernist design vision of interconnected geometries. This is demonstrated in the megastructure forms of both the Cinesphere and pods with their interconnecting walkways, as well as the more modest crystalline modular forms of the three village clusters, designed as gathering places for visitors. These structures are set against an ecological landscape of naturalized landforms, a range of water features, including canals, lagoons and a marina, offering various intimate and compelling views within its designed space.

This particular combination of elements constitutes one of the most important expressions of late twentieth century modernism in the history of the province — the naturalized landforms, on the cutting edge of new ecological design interests; the Cinesphere with its triodetic dome and pioneering IMAX technology; the Pavilion, comprised of five interconnected pods with their tensile structural arrangement; the Forum and the Children’s Village play area with their new forms of public engagement (both no longer in existence); and the overall programming designed to change the public perception of Toronto’s waterfront.

There exist a number of contextual and design attributes on the site that individually and collectively contribute to the provincial cultural heritage value of Ontario Place. The historical values are woven throughout the site and landscape, and expressed in the attributes described below.

The following attributes are expressed throughout the site, and continue to represent the original ideas behind the creation of Ontario Place:

The following attributes are located in the core area of Ontario Place and represent the innovative and iconic elements of the site as reflected in the structures, the integration of the architecture with the landscape and the water features: 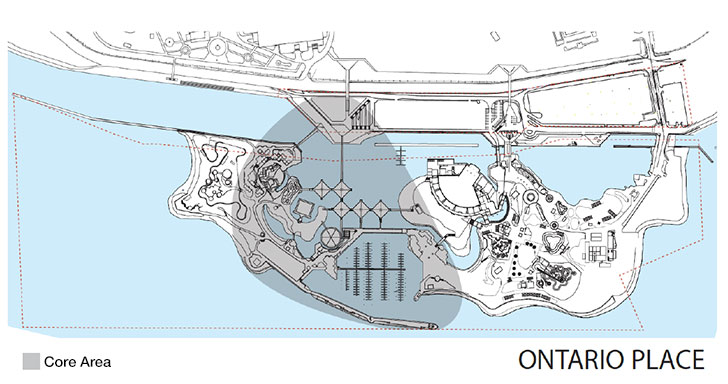